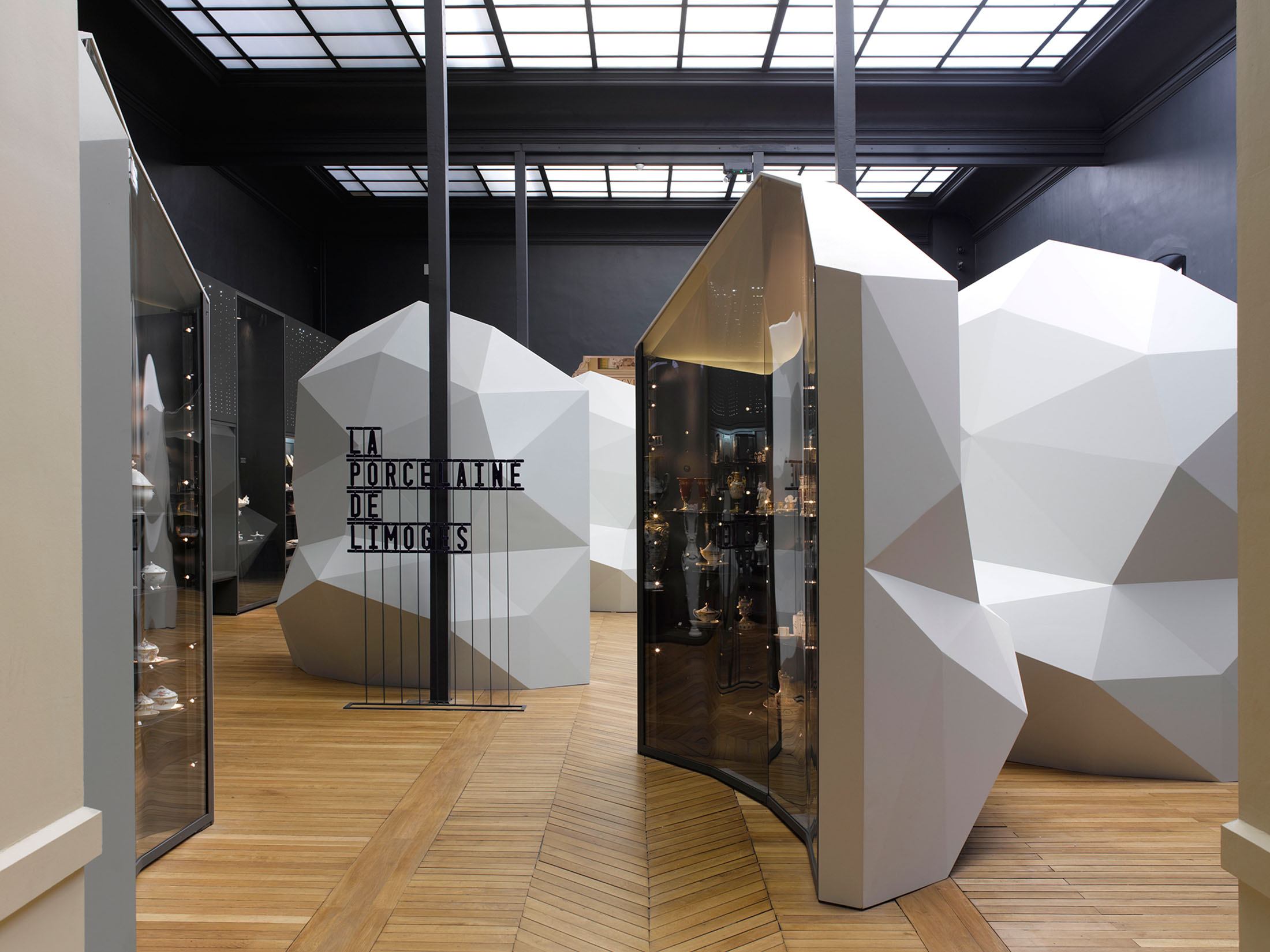 The two rooms devoted to Limoges porcelain are the high point of the visit. Located on the first floor of the historical museum, they have been restored to their original size, and are full of natural light. The walls have been painted in a plain colour against which the 22 displaycases stand out, like fixed objects in a dynamic setting. Bathed in the soft light of the atrium window, these white “shells” are the setting for a collection of Limoges porcelain that is unique in the world, following the history of Limousin production from the late 18th  century to the present day. Surrounding them, like household cupboards, large wall display cases show the tableware and unique pieces created for the World Fairs. When speaking about the design of these spaces, Zette Cazalas defined her work “like photographing a ballroom to celebrate the art of porcelain”.

In the first room you can discover the main stages in the history of Limoges porcelain between 1771 – when the first manufactory was founded – and the end of the 19th century, a watershed moment in the porcelain industry. The “Comte d’Artois” manufactory was the first company founded on Limousin soil after kaolin deposits were discovered at Saint-Yrieix-la-Perche. Founded in 1771 with the support of Turgot, in 1774 it received the protection of Louis XVI’s second brother, and from then on marked its works with the initials “CD”. Following severe technical and financial difficulties, the company was taken over in 1784 by the Sèvres Royal Manufactory, which in 1788 appointed a new Director, François Alluaud. Under his management, the quality of production improved and the decorations diversified, but the consequences caused by the Revolution put an end to the manufactory, and it was sold in 1796. The works from the Comte d’Artois manufactory were shown very early on in the museum. A number of pieces previously kept in the storerooms due to lack of space are now on show to the public.

The figureheads in the first few decades of the 19th century – Pierre Tharaud, Étienne Baignol and François II Alluaud – belonged to a generation which drew on the know-how of the Comte d’Artois manufactory. These entrepreneurs developed their talents as porcelain artists during the Restoration and cleared the way for industrialisation. As a counterpart to the artistic pieces displayed in the “shell displaycases”, the wall display cases evoke the technical progress that was generated by the work of these pioneers : the brown enamel of François II Alluaud, who was passionate about mineralogy, the high-fired decorations of Jean-Baptiste Ruaud, a trainee engineer, and others. These showcases also trace the inroads made by Limousin production into the Parisian market and the developments in decoration after the bronzemakers Jean-Baptiste Valin and Michel Aaron settled in Limoges in 1832. Around 30 porcelain companies were active in Limoges at that time, and their production, which until then had largely focused on tableware, turned towards decorative objects. One showcase is devoted to this production, although with the absence of marks, it is often difficult to know the specific origin of manufacture.

As an ode to the “Limoges white porcelain” which was developed in the 1850s, the showcases contain black smoked glass shelves which allow visitors to see Limoges porcelain in a new light: the material is magnified and the shapes – bisque porcelain sculptures, translucent “cloisonné” enamel – are subtly outlined. The museum designer has naturally devoted a large space to the masterpieces presented at the World Fairs, where the Limoges porcelain makers rivalled each other for virtuosity and boldness, especially the Cérès Riche service which the Pouyat manufactory exhibited in Paris in 1855. In the centre of the gallery, the place of honour goes to a table dressed with the Grain-de-riz service which was exhibited in 1878. Designed as a period room, this space is also home to a fireplace built by the Limoges School of Decorative Arts.

The opening of Limoges to international markets, in particular the American continent, was one of the noteworthy events in the second half of the 19th century. David Haviland settled in Limoges in 1842 and started his first company there in 1847. In 1872, his son Charles-Edward founded an artistic workshop in the Parisian district of Auteuil. He entrusted the management to Félix Bracquemond, and the Parisian service (1876) began to revive porcelain themes and decorations, opening up Limoges to Japanism.

The second exhibition room displays the stylistic developments that have occurred in Limoges porcelain since the start of the 20th century. This collection contains everything made by the Gérard, Dufraisseix et Morel (GDM) manufactory – which became Gérard, Dufraisseix et Abbot (GDA) in 1900 – for the Siegfried Bing Art Nouveau gallery. A specialist in high-fired decorations, the company’s pieces copied models by Paul Jouve, Edward Colonna and Georges de Feure. In 2010, pieces and casts from the manufactory were acquired to complete the museum’s historical collection, allowing us to exhibit several pieces of the Limoges service shown at the Chicago World Fair in 1893.

The International Exhibition of Decorative Arts, held in Paris in 1925, was a good source of advertising for the Limoges manufactories. The displaycases dedicated to this period focus considerably on the artists commissioned by the Théodore Haviland manufactory (Édouard-Marcel Sandoz, Suzanne Lalique, Jean Dufy etc.) and the designers who illustrated during this period, such as Léon Jouhaud or Camille Tharau. Faithful to its vocation as a research centre into the history of Limousin porcelain, the museum is also keen to display lesser-known manufactories, offering the public a complete, broad-ranging view of porcelain production. The impact of Limousin porcelain on everyday life is explored in this space. The wall display cases focus on the changes caused by the First World War (more women in factories, the development in manufacturing dolls’ heads and figurines) and technical changes (the emergence of “aluminite” fired porcelain, electrical insulators etc.). A section is devoted to the prestigious services made for Kings, Princes and Presidents all over the world (plates for the US Presidents Lincoln and Hayes, a service for Queen Maria Pia of Portugal, private service for the Empress Eugénie etc.).

Finally, a large area is used to show modern and contemporary designs, to illustrate the vitality of Limoges porcelain, in both the tableware and artistic sectors. Having tackled the post-war problems, which involved significant investments in production tools, from the 1960s onwards the manufactories devoted their time to redesigning forms and decorations (collaborations with Jean Lurçat, Jean Picart Le Doux, Jean-Jacques Prolongeau, Raymond Loewy, Roger Tallon, Marc Held etc.). This fertile soil resulted in new initiatives by the Artes Magnus association and the Centre for Research into Ceramic and Enamel (CRAFT), which invited artists who were unfamiliar with ceramics to use porcelain as a means of expression and creation.

The Limoges manufactories have long been loyal partners to the museum. Through the “tables des porcelainiers” (porcelain makers’ displays) the museum regularly exhibits the latest Limoges porcelain designs. After the presentations, the works are generously given by the porcelain makers to the museum. Thanks to these donations, hundreds of pieces have been entered in the museum’s inventory, making the museum a kind of “legal custodian” of contemporary designs. The visit finishes in an adjacent room where, in a magical atmosphere, subtle lighting effects reveal the translucent nature of porcelain lithophanies.